Beware: If you encounter any problems with the web version of Go Farm Yourself please read the "Note" section below.

Imagine you awake and find yourself on an island. You have no idea where you are and what happened. The only thing you know is that you have to keep going on.

But don't be afraid! In "Go Farm Yourself" you're not alone!

The island you stranded on is inhabitated by kind and helping people living together in a lovely little village. They will help you finding your place to build up your own farm and eventually be part of this new found community.

Will you be able to settle down in this unknown land?

GFY is our first game and first started out as a sample project for us to get to know the Godot Engine. As we progressed in the profession of making games so did this project evolve to a point where we didn't see any reason why not to release it.

Now just feel free to try our work (for free of course)! We really hope you enjoy it! Keep in mind, though: As for the fact that GFY is only a sample and we are already planning a new exciting project, don't expect any more content, large bugfixes or a highly polished game.

This WebGL version of the game was uploaded by request of several people on Discord and without intentions to be perfect. The game was intended to be played on Android and desktop platforms, not in your browser. Because of this, you might experience some strange behaviour you wouldn't if you we're using our offline version.  If you still want to play the web version, here are some known issues and workarounds.

The game was designed with a base resolution of 1920x1080, but the UI scaling of your OS applies to your browser too, making the game unable to fit for example a 13 inch MacBook pro with a 2560 x 1600 resolution on default scaling. A simple workaround would be to scale down your browser tab via the browser menu or "command/ctrl -".

This seems to be a problem related to Chrome on MacOS. We don't know exactly why this error appears specifically in Chrome on MacOS or how to fix, so for now please just use another browser or the offline version. Sorry :/

What is considered a "day"? The clock in the corner shows my local time, but I am not sure what the game considers a "day" in terms of the shop prices changing and completing tasks which are time based. I have checked at midnight local time, as well as other common times like 0600 and 0800 local. (UTC/GMT is still a few hours away for me to check those...)

Also, how does the whole inventory mechanic work? How much space is available (without additional storage buildings/plots)? Do different items have different storage types and/or storage use (I.E., do watermelons require more space than turnips)?

Some advice to the developer:

Separate the "engine" from the "UI (user interface)", and you will avoid a lot of issues such as redeploying for different screen sizes, input methods, etc. You only need to rewrite small parts of the UI to re-scale or handle different inputs. You also save yourself a lo of time and work because you have fewer places to update or track down bugs. I.E., would you rather find all the places where the engine is updating a UI element direcly, or have one single routine for the engine to call in the UI that takes care of the details of the update?

The above also becomes impotrant in larger projects. One team may be working on the game engine logic and know nothing about sound or 3D graphics fo he UI, another team might work on the sound, and another on the 3D gfx. The only information they need to exchange with each other are the API's they develop, not the entire codebase, allowing each team to focus on the part they are best at. Finally, as long as the API does not change, you can easily port to another device/platform by only providing the API without caring about the actual code behind the API.

Assume *NOTHING*. The price for hiring a worker, for example. Is that a one time cost? Per hour? Per Job? Per pair of socks you are wearing? Some games it is a one time fee, while others, it is per time-unit/job/etc. Do not assume the player can read your mind to know which it is! (Yes, I will eventually find out by playing, but for a first time player, I do not know how to evaluate if it is good or bad choice yet...)

Related to the above, give as much detail as you can, or a way to find additional detail. When buying a seedbag, the only way I found to find out how long it takes to plant and harvest is to buy it, *then* find out. Very frustrating. If there is a variable (whether constant, static, dynamic, temporary, etc) used in calculations, that is good candidate for presenting some way for players to find out it's value.

Optionally, I noticed that the from-plant-to-harvest time does give the base time. This is the kind of detail that is good. Consider giving similar details in the shop: Either the base price, or perhaps a mean average of the price over the last week, or some such. Same for something like the expected yield of crops per seedbag.

As a player, one thing I am evaluating is "is this game providing me with enough enterainment to bother playing it, and if the developer publishes other games, is the quality such that I want to try them out, too?" As it is right now, the answer to both is "No." It is in your power to change that to a "Yes!"

So I'd love to try this out but....how do you move about? I seem to be stuck on this.

In the Web version, arrow keys scroll. Click on any object/person to try to interact with them. Your view is always in "overhead god mode", so you do not need to control your character directly (For example, you can start to plant a crop then scroll up to the shop and sell off your last harvest--you do not need to 'walk' your character to the shop).

Edit to add: Your starting/main character ('Lori' in my game--I am not sure if the name is random or not) is at the bottom of the _longer_ stairs/steps. You do not need to manually move them: They will move automatically where they need to once you assign them a task/job.

Ups! I am stuck again.  My Raw Anicent Wood don't seem to count. Would love a fix :) Btw i play the offline window version, so maybe posted the wrong place. 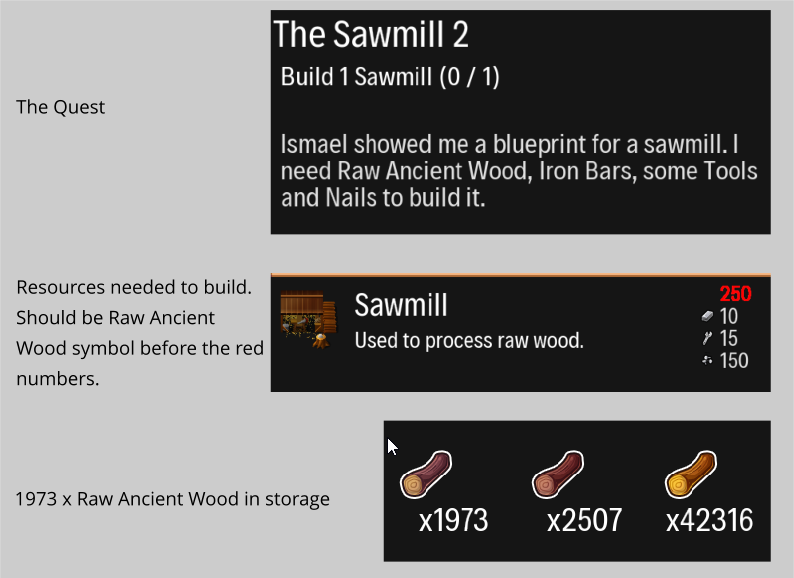 Theres actually more broken stuff than you think, the missing icon in front of the "250" is a subtle indicator. We have already fixed this and will release an update soon, but there are some more bugs we want to fix first. I'll keep you updated.

Thank you for the fast reply. Looking forward to see more of the game :)

you should be able to continue the game until the end. We went through all the quests and checked if the are actually doable or if something is missing. Have fun!

Hate to say it, but the the new offline window version dont work. I can see that it tryes to load, but it shuts down before game is loaded. So sorry...

Ok now you have to specifiy "offline window", do you mean the offline version we linked to in the description text above? If yes, which operating system are you using? If no, does the online version above work in your browser?

Oh and for bugs regarding quests, items and so on you can report on this version or the downloadable version, it affects both. Only problems regarding controls, graphics or sound could be specific to a certain os or game version :)

Love the start of the game, but i am stuck. No hardwood is spawning on first island, so i cant build Forge. Since i got no Forge i can't make Nails, so can't build the bridge to next island... Any tip please?

And i have 29111 normal wood, so I have chopped down aaaaaaalot of trees... (and that is after restarting game, so had more wood first time)

first of all, we really appreciate your dedication, 29k wood is kinda impressive 😉We‘re definitely going to look into this problem an get back to you with a fix as soon as possible.

Thank you. :) Looking forward to that :)

we just uploaded a new version of the game a few hours ago. You should now be able to chop some hardwood on the first island, although it's still rarer than regular wood. If you happen to stumble upon more roadblocks, feel free to reach out :)

That was fast! Off to chop some trees then. :)

Is this game only playable on an extra-large desktop monitor? I have a 2880x1800 screen and the game doesn't fit on it! (Chrome browser on a 15-inch MacBook.) If I make my browser window about 20% wider than my screen, then I can see the full width of the game by dragging the window around, which makes reading in-game dialogue awkward but possible... but there's no way for me to see all the way to the bottom of the game screen no matter what I do.

Also, any time I change tabs or make the window full-screen I get an error saying "WebGL context lost, please reload." Reloading takes 30+ seconds. The first time I loaded the game there was some sort of multi-page tutorial, but I didn't get to see it, and after reloading it's gone for good, so I'm not really sure what I'm doing...

The graphics are great and the game looks very ambitious, but so far all I've found is one bug after another, making the game unplayable! :(

I'm really happy you found your way to our little game and care enough to comment on it :)
Let's go over your problems from the easiest to the hardest to fix.
The help screen you saw at your first start can be accessed via the main menu (by pressing escape or the little cog icon in the top right corner) and pressing "Help", it just pops up at the first time playing so it doesn't annoy you everytime you start the game ;).
If you just want to play the game without any of the other bugs, i strongly advise you to use our non-web release of the game which is available on MacOS, Windows, Linux and Android. Just look for it on our itch profile or the description of the web build.
Also the game is designed for a 1920x1080 resolution, but i guess since MacOS applies UI scaling by default it doesn't fit on your screen. I can confirm that on my 13 inch MacBook.
The web release by itself only exists because some people were requesting it on Discord and isn't as thoroughly tested, it appears as if the scaling isn't working like on all other platforms.
However, there is a simple little hack around this problem: just scale the website via "command -" or the chrome menu.
Sadly, there seems to be a severe problem with our constellation of Godot version and MacOS version of Chrome, hence the WebGL context errors.
It seems to work just fine on Firefox for MacOS or for example Chrome on Windows, so if you'd still like to play it: please try the offline build or another browser (not Safari :D).
Hope i have been able to shed some light on your problems an you give it another try. 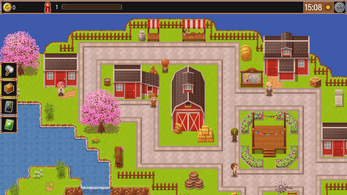 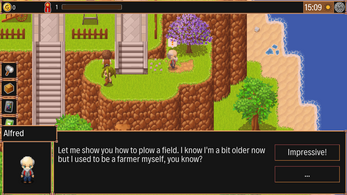 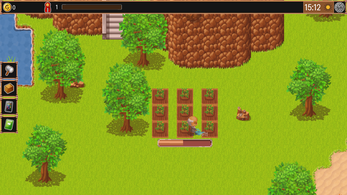 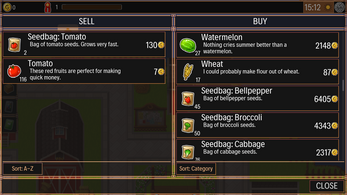